Barth’s and Overweg’s contracts with the British government required them to provide their own food. They ate well during the first part of the journey, supplementing rice and grains with the meat of hares or gazelles chased down by greyhounds or bought from hunters. In Murzuk, 500 miles into the Sahara, the pasha served them coffee and sherbet, and the British vice-consul feted them on roasted lamb and dried sardines, accompanied by rum, wine, and bottled stout.

The menu soon changed. Deeper into the desert, their stores ran short. The few people they came across who didn’t want to rob or kill them didn’t have any spare food to sell. When they found an ostrich egg, wrote Barth, it “caused us more delight, perhaps, than scientific travelers are strictly justified in deriving from such causes.”

After the austerities of the Sahara, Kano was a culinary high point. The market there offered everything a hungry man craved. Barth relished the street food: “Diminutive morsels of meat, attached to a small stick, were roasting, or rather stewing, in such a way that the fat, trickling down from the richer pieces attached to the top of  the stick, basted the lower ones. These dainty bits were sold for a single shell or ‘uri’ each.”

He also enjoyed the market’s roasted locusts, still a valued source of protein in sub-Saharan Africa. Barth called the taste “agreeable.” Many African explorers reviewed the dish. Friedrich Hornemann said roasted locusts had a taste “similar to that of red herrings, but more delicious.” David Livingstone pronounced them “strongly vegetable in taste, the flavor varying with the plants on which they feed. . . . Some are roasted and pounded into meal, which, eaten with a little salt, is palatable. It will keep thus for months. Boiled, they are disagreeable; but when they are roasted I should much prefer locusts to shrimps, though I would avoid both if possible.” Gustav Nachtigal also preferred them roasted. Of the dozen kinds eaten by natives, he was partial to the light-brown ones, though the speckled green-and-whites were also fine.

Barth ate meat whenever he could get it, domesticated or wild. Sometimes when he stopped in a village, the chief would send him a sheep or a bullock. During his first months in Timbuktu he ate pigeons every day. In some areas guinea fowls were common. On rare occasions he ate antelope and aoudad (Barbary sheep). Barth and Overweg agreed about the tastiest meat in Africa: giraffe. They also liked elephant, though its richness tended to cause havoc in the bowels. When possible, they added vegetables such as squash or beans from legume trees to their diet, and fruit such as papayas and tamarinds. In the desert they enjoyed a refreshing drink called rejire made from dried cheese and dates. 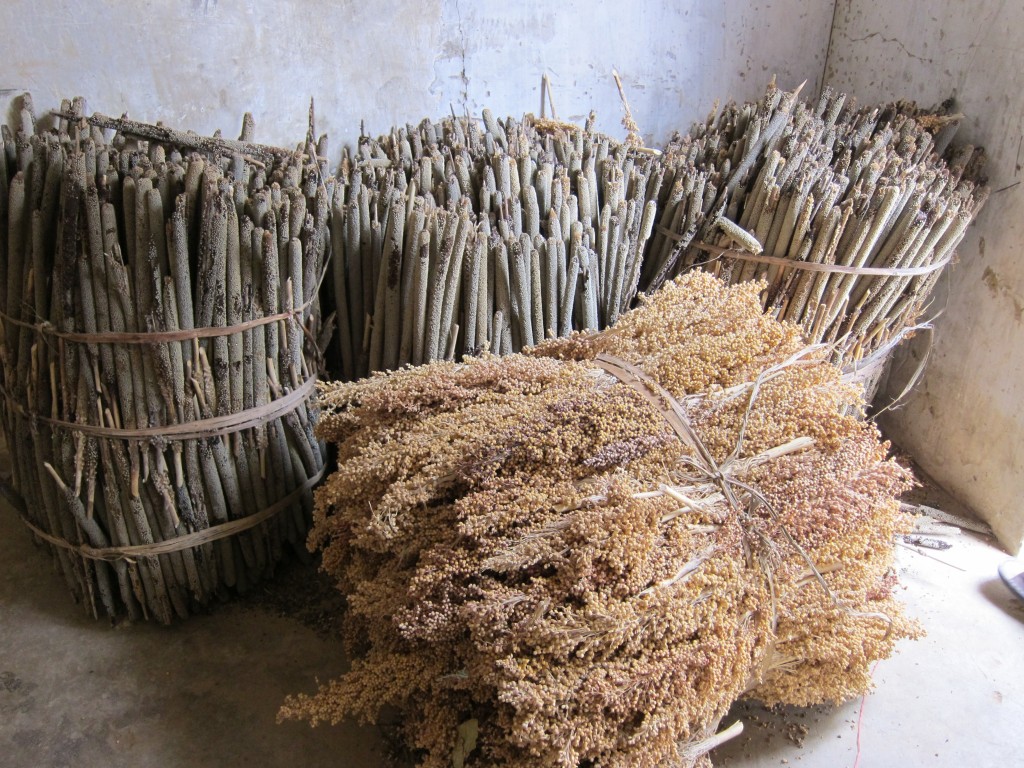 But most of the time they lived on grains, especially guinea corn, wheat, sorghum, and millet, prepared in dozens of ways—stewed, mashed, baked, roasted, rolled, fried, pancaked—sometimes mixed with milk or vegetables or bits of meat or cheese. En route to Timbuktu Barth’s typical dinner consisted of millet with vegetable paste made from tree-beans; for breakfast he mixed the cold paste with sour milk. He was fond of fura, bean cakes, and various dishes made from white guinea corn. On the other hand, in Musgu he was unable to choke down a paste made from red sorghum. During one long stretch he lived on boiled mashed groundnuts, which he grew to hate.

His deepest appreciation went to one simple food: “Milk, during the whole of my journey, formed my greatest luxury; but I would advise any African traveler to be particularly careful with this article, which is capable of destroying a weak stomach entirely; and he would do better to make it a rule always to mix it with a little water, or to have it boiled.”

The milk in Kukawa, however, disgusted him, because the Kanuris added cow’s urine to it, imparting a tang that he found repellent. Kanuris (and some Fulanis) still clean their milk bowls with cow urine, believing that it keeps the milk from going sour for several days. This practice nudged Barth towards camel’s milk, which he came to prefer.

I thought of Barth in Lagos as I tried nkwobi, a dish the menu described as “soft cow leg pieces in a secretly spiced sauce, with ugba and topped with fresh utazi leaves.” So many unknowns, so irresistible. But the secret sauce covered a mass so repulsively gristly and gelatinous that I couldn’t eject it from my mouth fast enough. “Cow leg pieces” turned out to mean “hooves.” Even Barth might have hesitated.