Barth became curious about the city of Kano on his trip around the Mediterranean, during a conversation with a Hausa slave in Tunisia. “Seeing the interest I took in his native country,” wrote Barth, “[he] made use of the simple but impressive words, ‘Please God, you shall go and visit Kano.’ These simple words were constantly ringing in my ears . . .”

Kano from Mt. Dala, 1851, from Travels and Discoveries

On February 2, 1851, after almost a year of hard travel, he reached Kano, “the celebrated emporium of Negroland.” It was by far the biggest place he had seen since leaving Tripoli. He was dazzled by “the wonders of this African London, Birmingham, and Manchester.” Kano was already 1,000 years old. Islam had arrived in the 14th century. The city’s existence was unknown in Europe until Leo Africanus mentioned it in his book of travels in the 16th century. 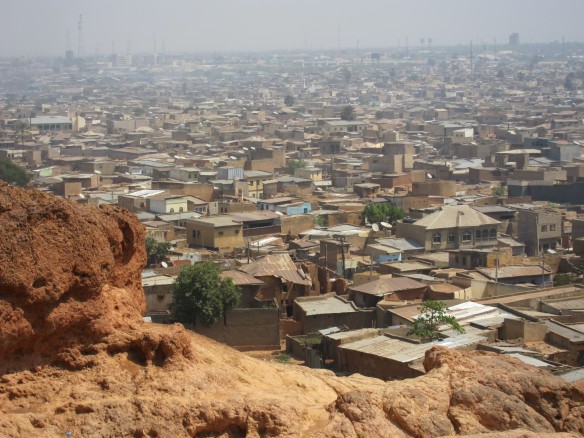 Barth estimated its population at 30,000, not including domestic slaves and periodic swellings from large caravans bringing salt, natron, or slaves to Kano’s vast market. He was amazed by the European goods for sale in this remote place 1,500 miles from Tripoli: cloth from England, beads from Trieste, paper from Venice, razors from Austria, sword blades from Germany.

He would have seen the temporary palace built for the emir in 1442, which still stands. It has been a school, the home of the city’s war chief, and the colonial offices of the  British. Today it houses the Gidan Makama Museum, an absorbing introduction to the region’s history and a striking example of Sudanese architecture.

The building’s walls are 10 feet thick, made of clay reinforced with the husks of beans. The annual rains partially dissolve the walls, which are repaired with more earth and fiber, in a seasonal cycle that is centuries old.

The size of a 19th-century African city could be gauged partly by the number of gates that interrupted its fortified walls. Kano had 15. The museum exhibits one of the old gates, a massive thing of rough timber sheathed with iron plates secured by crude rivets.

Many historical items of daily life are on display. A royal drum, the size of a small barrel, was once beaten to announce that the emir was on the move. Some dusty brass bells once adorned warhorses of Kano’s large cavalry. The bells of each kingdom had a different sound, to help soldiers distinguish friends from foe in battle. Displayed nearby were thick heavy swords and shields made of elephant or camel skin. On the pastoral side, there were hoes, sickles, and flutes, and jewelry made of bone and ivory to adorn rich brides. Against one wall was a hut of bamboo and thatch used by a mallam—a teacher of the Qur’an—with the traditional wooden slate on which he and his students wrote verses to be memorized.

Then as now, the people of Kano considered themselves to be living at the cosmopolitan center of the world, like Londoners in Barth’s time or New Yorkers in ours. “The ceremonies to be gone through,” complained Barth, “are scarcely less tedious than those at any European court.” He was annoyed at being detained by the hospitable but avaricious emir, who hoped to squeeze the impecunious infidel for presents, and kept him there for more than a month.

In 1849 the British Foreign Office sent three explorers into the mysterious lands south of the Sahara. Their goal: to scout caravan trade routes and commercial prospects in the vast, little-known territory called the Sudan. The word, shortened from the Arabic Beled e’ sudan, meant “land of the blacks,” or Negroland.

It encompassed far more than the present-day country called Sudan, taking in everything south of the Sahara and ten degrees or so north of the Equator, from the Atlantic coast to the mountains of Ethiopia. This area included most of today’s Senegal, Gambia, Guinea, Mali, Burkina Faso, Niger, Chad, and Sudan as well as northern Nigeria and northern Cameroon.

The expedition’s leader was a British evangelical abolitionist named James Richardson. Barth had been recommended to the British by two of the era’s eminent scientists, both Germans: Alexander von Humboldt, the great botanist who spent five years exploring South America, and Carl Ritter, who with von Humboldt had transformed the study of geography. Richardson invited Barth along to collect scientific and cultural data. Later in the planning, another young German scientist named Adolf Overweg joined the mission.

Things didn’t go as planned. Richardson expected the expedition to spend a year in Africa, perhaps two, but his assumptions soon proved dangerously flawed. By the time Barth returned to Europe, he had been away for five and a half years and had traveled more than 10,000 miles. No one was more surprised than Barth himself that he was gone so long or covered so much ground.

In the annals of exploration, few journeys match Barth’s for distance and duration. In terms of knowledge collected and ongoing relevance, none of the famous 19th-century explorers of Africa–Mungo Park, John Hanning Speke, David Livingstone, Henry Morton Stanley, James Baker, even Richard Burton–are comparable to Barth, whose discoveries and written work are still considered indispensable by modern historians, geographers, linguists, and ethnographers.

Yet the general public has never heard of him. Why? That question, which seems so simple, always opens the door to an enticing labyrinth–one of Barth’s favorite words. Who can resist walking into it? Here we go.