Barth spent most of his tour around the Mediterranean in North Africa and the Middle East. He first touched Africa at Tangiers, then proceeded east towards the Nile and on to the Levant. “I spent nearly my whole time with the Arabs,” he wrote, “and familiarized myself with that state of human society where the camel is man’s daily companion, and the culture of the date-tree his chief occupation.”

The trip was invaluable training for the great journey to come. He tested himself by traveling through dozens of cultures, many of them Islamic. He learned how to cope with fever, illness, and gunshot wounds–in Egypt he survived an attack by Bedouin thieves who shot him in both legs and left him unconscious. He became skilled at traveling leanly and alone for long periods. He perfected his Arabic and picked up several other languages, including Turkish, which would one day come in handy at a crucial moment as he attempted to enter Timbuktu disguised as a Syrian sherif. He trained himself to recognize links between a region’s history, geography, languages, and cultures, links he would later find in central Africa. The trip exhilarated him. He was gone for nearly three years.

Spending so much time alone in the desert reinforced his misfit tendencies. “He had become the very model of the imperious, the closed-off, and the ascetic,” remembered Gustav von Schubert, Barth’s brother-in-law, intimate friend, and biographer. Shortly before Barth returned, von Schubert had started courting the explorer’s beloved younger sister, Mathilde. “Later we became close friends,” wrote von Schubert, “but it took a long time before I was able to thaw the ice around his heart and experience the depths of his character. In his first letter to me, he wrote, ‘If you make my sister unhappy, I will shoot you dead,’ which was clear enough.”

Barth wasted no time pursuing his three main goals: to write a scholarly multi-volume account of his journey, to secure an academic position, and to get married. Things looked promising, at first. He found a publisher. He got a part-time job in the archeology department at the University of Berlin. He beseiged a prospective bride.

Nothing worked out. The first volume of his book, Wanderings Along the Shores of the Mediterranean, was praised for its meticulous scholarship but slammed for its boring style and presentation. The public declined to buy it, so the publisher cancelled the second volume. Nevertheless, the book established Barth among Berlin’s influential academics and scientists as a formidable scholar who was also fearless and tireless.

At the university, he lectured on soil composition. His droning recitation of data stupefied his students, who stopped coming. The class was dropped. Barth must have been equally scintillating as a suitor—his prospective bride dropped him too.

By autumn of 1849, Barth felt pummeled by failure. Yet the trip around the Mediterranean had confirmed his passions: deep scholarship and rigorous travel. If only there was some way to combine them into a living. He began daydreaming about a long journey into Asia. He was twenty-eight. 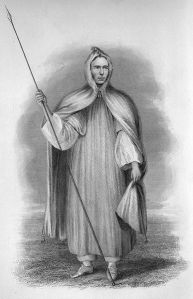 While Barth was licking his wounds, an English abolitionist named James Richardson finally persuaded the British Foreign Office to fund a journey into the unknown lands of central Africa called the Sudan, south of the Sahara. The mission’s main purpose would be to sign treaties with the region’s chiefs and to scout potential markets for British commerce, but the Foreign Office required Richardson to take along a scientist to gather infomation about these mysterious peoples and places.

At the time, Germany was producing the best-trained scientists in the world, so that’s where Richardson turned for help. Two of Germany’s most eminent scientists, Carl Ritter and Alexander von Humboldt, conferred and immediately agreed on a candidate: their former student Heinrich Barth, recently returned from his three-year journey through North Africa and the Middle East.

So in early October 1849, Ritter called Barth to his office and asked him a question that changed everything: would he be interested in departing almost immediately with a British expedition into the Sudan?

In 1849 the British Foreign Office sent three explorers into the mysterious lands south of the Sahara. Their goal: to scout caravan trade routes and commercial prospects in the vast, little-known territory called the Sudan. The word, shortened from the Arabic Beled e’ sudan, meant “land of the blacks,” or Negroland.

It encompassed far more than the present-day country called Sudan, taking in everything south of the Sahara and ten degrees or so north of the Equator, from the Atlantic coast to the mountains of Ethiopia. This area included most of today’s Senegal, Gambia, Guinea, Mali, Burkina Faso, Niger, Chad, and Sudan as well as northern Nigeria and northern Cameroon.

The expedition’s leader was a British evangelical abolitionist named James Richardson. Barth had been recommended to the British by two of the era’s eminent scientists, both Germans: Alexander von Humboldt, the great botanist who spent five years exploring South America, and Carl Ritter, who with von Humboldt had transformed the study of geography. Richardson invited Barth along to collect scientific and cultural data. Later in the planning, another young German scientist named Adolf Overweg joined the mission.

Things didn’t go as planned. Richardson expected the expedition to spend a year in Africa, perhaps two, but his assumptions soon proved dangerously flawed. By the time Barth returned to Europe, he had been away for five and a half years and had traveled more than 10,000 miles. No one was more surprised than Barth himself that he was gone so long or covered so much ground.

In the annals of exploration, few journeys match Barth’s for distance and duration. In terms of knowledge collected and ongoing relevance, none of the famous 19th-century explorers of Africa–Mungo Park, John Hanning Speke, David Livingstone, Henry Morton Stanley, James Baker, even Richard Burton–are comparable to Barth, whose discoveries and written work are still considered indispensable by modern historians, geographers, linguists, and ethnographers.

Yet the general public has never heard of him. Why? That question, which seems so simple, always opens the door to an enticing labyrinth–one of Barth’s favorite words. Who can resist walking into it? Here we go.