One of the most fascinating and perilous segments of Barth’s journey occurred in the district of Aïr in the Sahara, in present-day Niger. About 300 miles long and 200 miles wide, Aïr consists of steep disconnected massifs and volcanic cones, some rising more than 6,000 feet from the desert floor. Barth called it “the Switzerland of the desert.” Until he described it, Europeans were unaware that the Sahara contained such landscapes. Before Barth’s party entered the region, no European had ever set foot there. European visitors would be extremely rare for many decades afterwards. 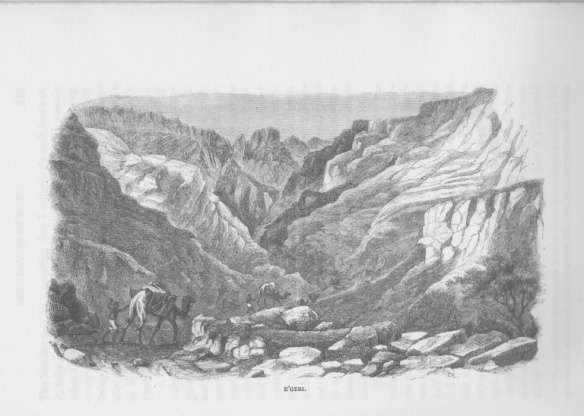 The landscape of Aïr. From Travels and Discoveries.

In Barth’s day, Aïr was an isolated redoubt occupied by gangs of Tuareg brigands who had never been subdued by an outside power. This remained true, off and on, for next 150 years. I had hoped to visit Aïr while researching my book, but the district was off-limits to travelers because Tuareg rebels had a base there.

At the time of Barth’s journey,  the capital of Aïr was Tintellust, deep in the region’s heart. Barth’s group reached there soon after being plundered and nearly murdered by Tuaregs in Aïr. The Europeans expected Tintellust to be a city, but it turned out to be a village of 250 dwellings shaded by trees in a pleasant mountain valley. The explorers weren’t too disappointed, because for the first time in weeks they felt safe. Tintellust was the home of Sultan Annur, leader of the Kel Owis, a Tuareg tribe. For a large sum, Annur agreed to protect the expedition.

Annur told the Christians to camp at a spot 800 yards from the village on some sand hills. The location offered sweeping views of the valley and the mountains. Barth predicted that the place would henceforth be called the “English Hill” or the “Hill of the Christians.”

Francis Rennell Rodd, a British explorer, traveled in Aïr in the 1920s and wrote a wonderful book about it called People of the Veil. Rodd found Aïr and its Tuareg inhabitants exactly as Barth had described them 75 years earlier. I especially like Rodd’s description of male Tuaregs: “The men never grow fat: they are hard and fit and dry like the nerve of a bow, or a spring in tension. Of all their characteristics the one I have most vividly in mind is their grace of carriage. The men are born to walk and move as kings, they stride along swiftly and easily, like Princes of the Earth, fearing no man, cringing before none, and consciously superior to other people.” Their belligerence and opportunism, noted Rodd, hadn’t changed either, as expressed in one of their sayings: “Kiss the hand you cannot cut off.”

Rodd wanted to visit Tintellust to look for traces of Barth, whom he called “perhaps the greatest traveler there has ever been in Africa.” Tintellust wasn’t on any map, but Rodd’s guide knew the village and took him there. As they reached the outskirts, the guide pointed out a place called “the House of the Christians.” When Rodd asked why, the guide said that in the olden days three white Christians who weren’t French had come to Tintellust—not as conquerors, like the French, but as friends of Chief Annur—so the thatch huts where they camped had never been inhabited or pulled down. All that remained of the camp, noted Rodd, were “the traces of two straw huts and a shelter, a wooden water trough, and some broken pots.”

In 2005 Julia Winckler, a British photographer and teacher fascinated by Barth, traveled to Tintellust. She too was shown Barth’s old encampment. She documented her visit to Tintellust (and Agadez) with photographs and videos: www.retracingheinrichbarth.co.uk. In Tintellust, according to Winckler, a story persists that Barth buried treasure nearby, and the villagers occasionally still dig for it. Barth would be amused–by the time he and his ragged group reached Tintellust, they had been pillaged several times and had no surplus to bury.

The nomads at the muddy pond were Arabs from Agadez, an old Saharan entrepot in present-day Niger. Their 60 camels drank and looked supercilious.

A boy and a small girl in a multicolored robe stood behind the herd. The girl was a dynamo, scolding the camels in a shrill voice and whacking their legs with a stick if they tried to stray. 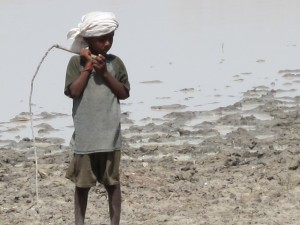 Nasiru Wada said it would be OK to take her picture, but to give her a small gift of money. She stared at the bills in her hand in amazement. Nasiru, a joker who favored ironic teasing, said to her, “You will be”—he hooked his little finger—“my wife.” Instantly, the wonder on her face turned to disgust. She dropped the bills as if they were turds. “Forgive me,” Nasiru said quickly. “It was a joke.” She studied him, picked up the money, and spun away. 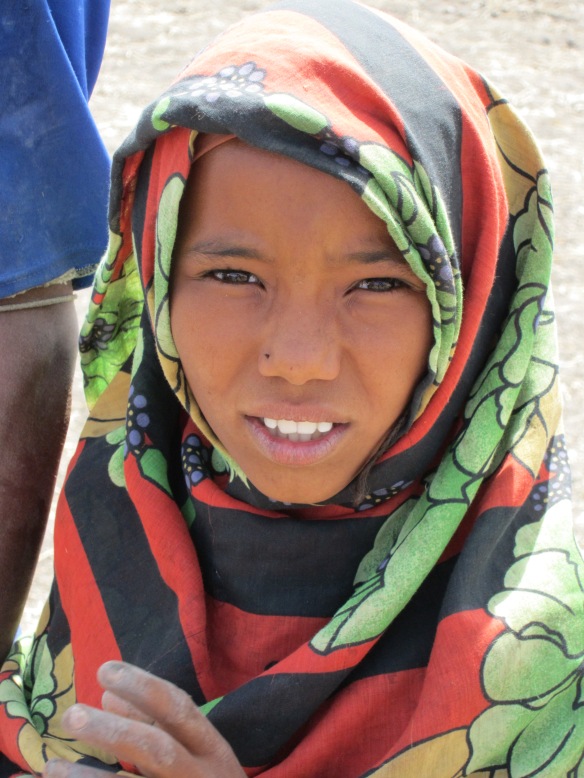 Long stretches of this road toward Lake Chad were undrivable because of craters and broken asphalt, so we followed the dirt track alongside it. In the middle of nowhere, a huge crumbling billboard featured the gigantic name and photo of some politician advertising himself as the “Lion of the Desert.” Sometimes many dirt tracks converged in a village and then scattered, so we had to ask for directions. 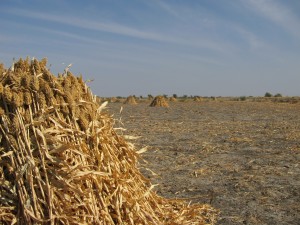 The thatched roofs changed from the bowl-shaped design of the Fulanis to the triangular twists of the Kanuris, echoed by the stacks of guinea corn in flat fields that went to the horizon. The flatness conspired with the intense heat to play visual tricks. Distant trees shimmered and floated on the horizon, creating the mirage of a lake shore. But Lake Chad doesn’t reveal itself so easily.

At 5:00 we reached Baga, a freckle of a town on a finger jutting into the lake. The water itself remained invisible. Baga’s only hotel was part of a walled open-air bar with a shed roof. At the back stood a row of  metal doors set into a windowless bunker of concrete—the hotel portion of the establishment. Men and women drinking beer turned to examine us, then resumed their conversations as a soccer game played on television.

The two Nasirus consulted and said we were leaving. I assumed that, as Muslims, the drinking offended them, but their concern was security. “People see a white person and might think you have money, and want to rob you,” said Nasiru Datti. We later learned that Baga’s few visitors had stopped taking the hotel van because the driver had been tipping off his buddies when white people were coming; the buddies would ambush the van and plunder the passengers.

The next closest lodging was in Kukawa, 20 bumpy miles west. I wanted to see the lake, so we put our plans for lodging on hold and asked some men sitting on a bench in Baga for directions to the water. You’ll never find it, they said. One young man offered to get in the car and guide us there.

Many twists and turns later, a couple of miles out of town, we reached a row of boats painted with geometric designs, on the shore of what appeared to be a river about 50 yards wide. In fact it was one of the myriad reed-flanked channels that constitute Lake Chad. When Barth saw the lake’s marshy waterways and tall reeds, he realized that one of the mission’s tasks would be impossible: to map Lake Chad’s borders. The boundaries between land and water were indistinct and changed each season. He saw large numbers of waterfowl, crocodiles, and hippopotamuses.

He also glimpsed the mysterious people whom the Kanuris called the Budduma, “people of the grass,” who lived on islands in the lake, where they raised cattle. They called themselves Yedina and spoke their own language. Notorious pirates, they raided shoreline villages and vanished back into the lake’s wilderness of reeds and channels. Neither of the Nasirus had heard of the Budduma. “Barth is teaching us,” said Nasiru Wada. I asked our Baga passenger if the Budduma still existed. Oh yes, he said, on the islands. At the lake, he pointed out a Budduma woman speaking the language. 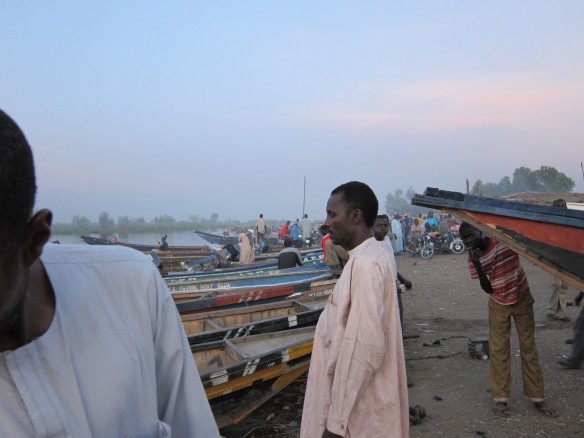 Lake Chad’s labyrinthine channels still provide excellent cover for smugglers and illegal immigrants–the lake touches Nigeria, Niger, Cameroon, and Chad–so entry-points like Baga are filled with security personnel. Though the shoreline was crowded with people selling and socializing, our arrival immediately drew the attention of the marine police, the regular police, soldiers, customs officials, and immigration officers. To deflect suspicion, I presented myself as a historian, not a journalist. Their questions soon moved from wary to curious and friendly. The Nigerian “underwear bomber” had recently been nabbed while trying to blow up a U. S. airliner, igniting dark mistrust of Nigerians in America. The paranoia went in both directions: Nasuri Wada later told me that the lake authorities at first suspected me of being a CIA agent.

Night fell. We still needed a place to stay. Our Baga passenger overheard our dilemma and insisted on taking us to see his brother, the village head, who had authority over all such matters. Having no alternative, we agreed.