In the last post I mentioned that Timbuktu’s location near the Niger River made it the place “where the camel meets the canoe.” In Barth’s day those canoes landed at Kabara, a village on the Niger about eight miles from Timbuktu. Barth disembarked there after spending several days in a dugout, winding through the tributaries and channels that spill into the Niger from the south, upstream from the village. At Kabara he left the river and rode through the desert to Timbuktu. In those days thieves made a good living on the road that connected the two places.

Barth’s arrival in Timbuktu, from Travels and Discoveries

These days a traveler coming from Kabara passes an agricultural project run by an evangelical sect, a small modern airport, an encampment of Bela (formerly the black slaves of Tuaregs), then a spot where people dig clay for bricks. Closer to Timbuktu a traveler reaches the mega-compound of Muammar Qaddafi, the Libyan despot. Some years ago, to the bewilderment of the locals, Qaddafi developed a fondness for Timbuktu, built the compound, and visited infrequently. He also connected his palace to the Niger with a canal, which some residents blame for Timbuktu’s mosquitoes. Qaddafi is gone but the irritants he attracted remain, in small numbers.

I asked Shindouk if lions and other wildlife still roamed between Kabara and Timbuktu. He shook his head. “On the road to Kabara,” he said, “there’s not even a pigeon. Once there were ostriches and gazelles, but they’ve all been killed.”

Some things about the road haven’t changed. It’s still a sun-baked straight line from river to town. Alongside it, people still rest in slivers of shade cast by stunted trees. Donkeys and their keepers still move briskly between the Niger and Timbuktu. Heading towards the port, the donkeys carry nothing. Heading towards town, they nearly disappear beneath their wide loads of millet stalks or river grass, sold for fodder in the markets.

When Barth reached Kabara the rainy season had started and the port was bustling. Barth was posing as a Syrian sherif. The people in Kabara were split between curiosity and suspicion about him. He wasn’t sure how long his disguise would hold, or what would happen to him once he entered Timbuktu. He spent a few anxious days in the village while his guide, a devious rascal, tried to arrange protection in town.

When I visited Kabara, its harbor basin was somnolent and empty of vessels. The only action was four women washing clothes, as their kids loitered and fished nearby. My guide, a young Songhai named Mahamane Hameye, explained that Kabara used to be busy but its harbor began disappearing in the dry season, so boats couldn’t reach it. Now most river traffic prefers to land at Korioume, a couple of miles upstream.

Part of the road to Korioume was generously shaded by eucalyptus trees. Rice and vegetables grew alongside. All this green, so close to the desert, was visually jarring.

Korioume more closely resembled the scene Barth saw in Kabara. The Niger looked at least a mile wide, the “noble stream” of so many accounts of exploration. 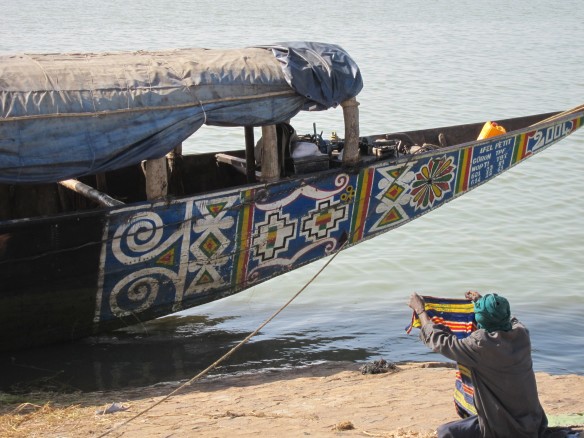 Millet grew on islands far out in the river. Soldiers waiting for the ferry flirted with women doing laundry. Traders, trucks, cargo, and boats of various sizes crowded the waterfront—dugouts painted with geometric designs, fishing boats with big square nets, the big canopied boats called pinasses that carry cargo and passengers between Gao and Mopti, other port towns on the Niger. “Something comes and something goes,” said Mahamane. Today one of the things going was slabs of salt, probably from Taoudeni, lined up on the shore. In the dry season, when the river thinned, hippos came near here and sometimes threatened the smaller boats.

Within minutes of leaving Korioume, we were back in the sand and scrub of the Sahara, and the Niger was a fading green dream.