Barth entered Timbuktu in September 1853. He didn’t expect to stay long. When explorers make plans, the gods snicker. He got stuck in Timbuktu and environs for eight months. For much of that time he was under a death threat. He would have been expelled and probably killed if not for his protector, Ahmed al-Bakkay, Sheikh of Timbuktu, who risked his own life to defend Barth’s.

The house where al-Bakkay lodged the explorer is now a private residence on the Rue Heinrich Barth. A plaque commemorates it. A small front room in the house has been designated as a museum open to the public, admission about $2. The room features several small pictures of Barth, some placards in English, French, and German about the explorer’s accomplishments and significance, and a poster-map of the route, with small portraits of the expedition’s four Europeans. A five-volume German edition of Travels and Discoveries sits behind glass on a shelf. The room is probably mildly interesting to people who have never heard of Barth, but to me it was all familiar and hence disappointing.

Luckily, the house’s owner, Alassane Alpha Sane Haidara, was at home, and when he heard that I was writing a book about Barth, he graciously let me look around the rest of the two-story residence. The house had been in Haidara’s family since his forebears bought it from Sheikh al-Bakkay after Barth’s departure. 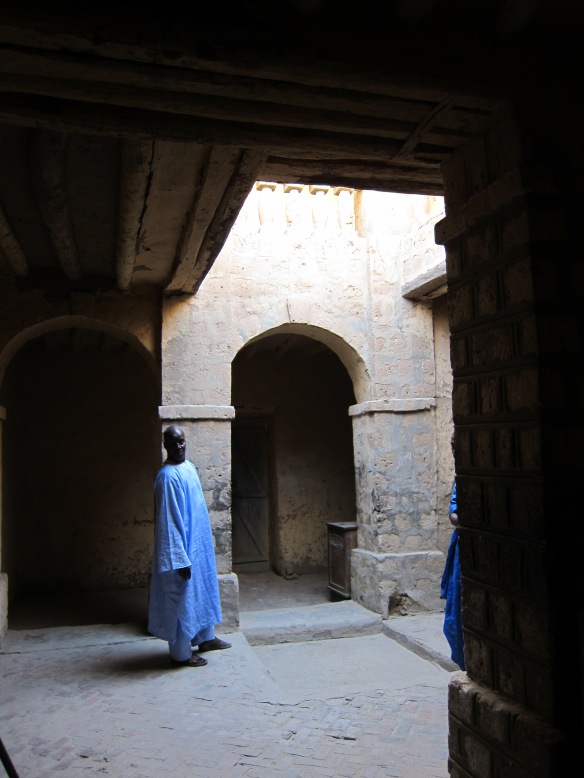 The floor plan had changed over the decades, but some of it remained just as Barth described. It was stirring to imagine him here, where he spent so much time and weathered so many threats. For much of his stay in Timbuktu he was essentially under house arrest, for his own safety.

His favorite spot in the house was the rooftop terrace, where he could exercise and look out over the town. From there he could see rounded huts made of matting, squarish mud-brick houses, and a small market. To the north, towering over its neighborhood, was the earthen Sankore mosque, built in the 14th century by Mansa Musa. It had been the heart of Timbuktu during the town’s golden age of scholarship, drawing learned men from all over north Africa and the Middle East. Beyond the buildings, in every direction, was the Sahara.

Barth’s rooftop view, with Sankore in background. From Travels and Discoveries

Much of what Barth saw remains unchanged, with the additions of cinder blocks, electrical wires, and satellite dishes. 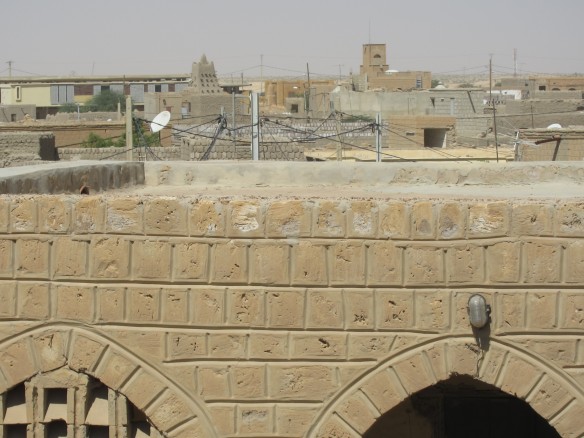 View from rooftop with Sankore mosque in left-central background

Sheikh al-Bakkay lived 25 paces from Barth’s house, cater-corner across a small square. It’s a modest place. The two men often crossed the square to discuss religion or history or the latest machinations of Barth’s enemies.

The explorer made many friends during his journey, but the Sheikh was the greatest of them, partly because they spent so much time together but mostly because al-Bakkay’s open-minded curiosity and intelligence matched Barth’s. Their friendship survived many challenges both in Timtuktu and after Barth returned to Britain, where the government rebuffed his efforts on behalf of the man who had saved his life.

In one of history’s pleasing parallels, after Tuareg plunderers and cutthroats left Alexander Gordon Laing for dead, the explorer found refuge and care in the desert encampment of al-Bakkay’s father. This kindness allowed Laing to resume his journey to Timbuktu. Al-Bakkay met him there, the only Christian the Sheikh had ever seen before Barth arrived. (Al-Bakkay was unaware, until Barth told him, of the visit by René Caillié, who had come and gone in disguise.)

Barth doesn’t mention the houses in Timbuktu where his European predecessors stayed, but plaques now mark these places, a nod at the bravery of the first Europeans who dared to visit–a Scot, a Frenchman, a German. Coming across these places while wandering the town is a reminder that Timbuktu once signified the far edge of the world.