When my grandfather wanted to signify something far out of reach or unimaginably far away, the thing or person would be “way out in Timbuktu” or “gone to Timbuktu.” As a child I loved the word’s percussive sound and exotic aura. (For similar purposes he used a musical word that I heard as “Pulchapeck,” which I assumed was another of his fanciful coinages. Decades later while studying an atlas–a favorite pastime–I was shocked to come across Chapultepec. It turned out to be the site of a once-famous battle between U.S. and Mexican troops in 1847, probably the origin of my grandfather’s usage.) 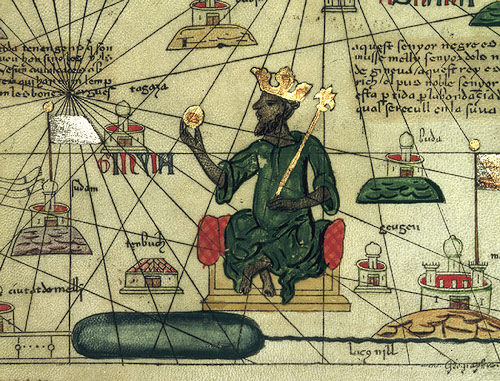 Mansa Musa holding a nugget of gold, from a 1375 Catalan Atlas of the known world

It was years before I learned that Timbuktu existed outside his imagination. I also learned that for centuries of Western history, the imagination had been Timbuktu’s main location. The cause was probably Mansa Musa, emperor of Mali, who once ruled the city. In 1324 he made a haj across Africa through Cairo to Mecca. He traveled with an enormous caravan, including 80 camels that carried 300 pounds of gold each. Along the way he freely lightened these camels, especially in Cairo. Soon Europe was abuzz with rumors about golden cities in the heart of the Sahara. This chimera refused to die for more than five centuries, and many Europeans would die pursuing it.

Meanwhile African travelers, traders, and scholars streamed through Timbuktu. A few left tantalizing reports. The restless Moroccan traveler Ibn Battuta visited around 1352 and wrote a short account that mentioned gold and many naked women. Leo Africanus, a Spanish Moor, reached the city around 1510 and was impressed by the number of scholars and gold plates. Then in 1591 the king of Morocco sent an army that conquered and looted Timbuktu, and marched its scholars to Morocco in chains. To Europe, the place seemed to go dark.

After a few quiet centuries, Europe’s interest in Timbuktu reawakened, and the race to reach it was on. In 1824 the French Société de Géographie offered 10,000 francs to anyone who made it to the city and returned alive. The British were determined to beat the French. Most of the contestants didn’t survive the race. 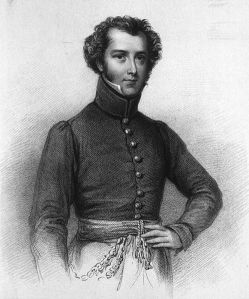 In the first half of the 19th century, only two Europeans reached Timbuktu. The first was Major Alexander Gordon Laing, who led a British expedition from Tripoli. After being viciously attacked by Tuaregs and left for dead in the middle of the desert, he somehow lashed himself on to Timbuktu, arriving in 1826. The Muslim fundamentalists who controlled the place were incensed that an infidel was polluting their holy city. After five weeks, Laing was expelled. Not far into the desert, his guides murdered him and burned his journals.

A year and a half later, in 1828, another European sneaked into Timbuktu disguised as a poor Muslim traveler. His name was René Caillié, a French dreamer inspired by Defoe’s Robinson Crusoe. Everything about Caillié’s story defies belief: the years of sacrifice in preparation for the journey to Timbuktu, the horrible afflictions suffered en route and on the way home, the adulation and bestsellerdom followed by humiliation and poverty. He stayed in Timbuktu undetected for two weeks—after hearing about Laing, he decided not to dawdle—but he did return to Europe and collect the prize money, to the dismay of the British.