It happened fast. A motorcycle spurted from behind a truck and hit Nasiru Wada’s car head-on. The airborne rider thumped into the car’s windshield and rolled off the side. His passenger sprawled on the hood.

Nasiru jumped out. He barely glanced at the two abraded young men slowly getting to their feet. He was focused on his prized Corolla, now blemished by a smashed headlight and dislocated fender. The headlight would have to be repaired before we started our trip the next day towards Lake Chad. Nasiru shook his head, exasperated. The young men, looking chagrined but intact, were inspecting the motorcycle’s crumpled front end. As we left, they were pushing the bike towards the side of the road. Few words were exchanged, and no information.

Considering the anarchy of Kano’s traffic, we would be lucky to get out of town after only one collision. The roads, no matter how wide, had no lane markings or stop lights. Right-of-way was earned by nerve and loud horns, both of which every driver in Kano exercised freely.

Okadas in Kano, by Andy Waite

Two-thirds of the vehicles seemed to be motorcycles and scooters. Many were okadas (taxis).They swarmed and buzzed like hornets, darting into the smallest gap, their side mirrors pushed in to create an extra few inches of clearance. They often surrounded Nasiru’s car, only inches away no matter the speed, before his insistent horn parted them like a shark charging into a school of baitfish.

Sometimes this seething chaos congealed like quick-drying cement. Progress was measured in fractions of inches. We once needed 30 minutes to gain one car-length. The blockage was caused by a taxi-van that had stopped in the middle of a crowded intersection, a perfect spot that the driver refused to leave until all his seats held paying customers. I spent the lull watching goats pick through a hill of garbage on the roadside and breathing in Kano’s bouquet of exhaust, dust, and wood smoke.

Barth was invigorated by Kano’s crackling entrepreneurial energy. That aspect of the city hadn’t changed. Most roads were lined with small businesses, some of them nothing more than ramshackle sheds. Mechanics hung auto parts from trees, women displayed colorful cloth or vegetables on the ground. Everyone seemed to be selling something or haggling to buy.

This energy contributed to the city’s tolerance of immigrants and religions other than Islam. Sharia law wasn’t enforced in the new settlements, said Nasiru Datti, where people could practice their faiths. These new towns also had clubs and places where anyone could go to drink alcohol, prohibited by Islam. The people of Kano believed in peaceful coexistence. The fanatical violence that had rocked other places in northern Nigeria had so far bypassed them. [Update: this changed on January 20, 2012, when the city was rocked by 20 coordinated bombings, claimed by the radical sect Boko Haram, that targeted police stations and certain homes.] “Kano is a commercial city,” said Nasiru. He laughed. “Nobody here wants trouble that could keep them from going to the market the next day.” 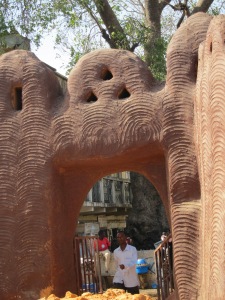 Yet if someone returning from the new towns was caught drunk in old Kano, the penalty was 80 lashes. Adulterers got 80 lashes in the market, if they were single. If married, they were stoned to death.

“But we’ve never had a stoning,” said Nasiru, “because you need four eyewitnesses to the act. If you only have three accusers, those three get 80 lashes, to keep people from being accused unjustly.”

We picked up Nasiru’s younger sister at Bayero University, where she had earned a degree in biochemistry. Like most women in Kano, she wore a headscarf but no veil. Some families allowed women to be educated and to work, others didn’t. Nasiru and his sister were two of their father’s 19 children. When Nasiru heard that I had only two kids, he looked sympathetic. When I said they were both sons, he looked concerned. “So you have no daughters to take care of you,” he said somberly.

We left Kano the next morning, heading east toward Lake Chad.