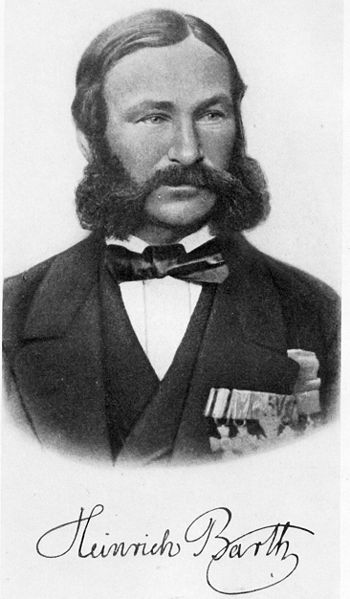 first came across Heinrich Barth in The Shadow of the Sun, a book of dispatches about Africa by the Polish foreign correspondent Ryszard Kapuścińksi. In Timbuktu, Kapuścińksi notices a plaque on a house where Barth spent nearly eight months in 1853-1854.  A hard traveler himself, Kapuścińksi devotes several admiring sentences to Barth, calling him “one of the greatest travelers in the world” for his five years exploring the Sahara.

“Several times, sick and pursued by bandits, he bade his life farewell,” continues Kapuścińksi. “Dying of thirst, he would cut his veins and drink his own blood to survive. Eventually he returned to Europe, where no one appreciated the unique feat he had accomplished. Bitter, worn out by the hardships of his voyage, he died in 1865 at the age of forty-four, not understanding that the human imagination is incapable of traveling to the frontier he had crossed in the Sahara.”

The passage electrified me. I love reading about explorers but had never heard of this remarkable man or his painful life-story. One of the world’s greatest travelers? Escaped death many times? Drank his own blood? Died bitter and unsung? It sounded like the bones of a great story. It also sounded far-fetched. Kapuścińksi, a wonderful writer, did sometimes stretch the limits of nonfiction to improve bothersome facts. So I explained away the electricity, finished the book, and put it aside.

But Barth wasn’t finished with me. Though I was researching another book, Kapuścińksi’s summary of the explorer’s life kept popping back to mind. When an idea refuses to go away, I always indulge my instincts and take the detour. Usually to a dead end, but the trip is always interesting.

That’s what I expected when I took the lazy first step of googling Barth. Wikipedia’s short page on him further provoked my curiosity. More googling turned up lots of brief references, mere teases, as were the indexes of my books on African exploration.

Barth began pulling me away from other work. I finally let my curiosity off the leash and tracked down a scarce and expensive edition of his account of his epic journey, Travels and Discoveries in North and Central Africa. To tell this story, Barth had filled five volumes and 3,500 pages. (In June 2011, Cambridge University Press reissued all five volumes in paperback.)

The deeper I sank into his adventure and its aftermath, the more admirable and intriguing he became. His feats and fate beggared belief. He had made his journey for the British government and had written his account in his employers’ language, yet there were no books about him in English. Here was a forgotten story that would never bore me or readers, and that deserved to be told.

So I told it. My book about Barth, A Labyrinth of Kingdoms: 10,000 Miles Through Islamic Africa, will be published by W. W. Norton in June 2012.

I intend to post here at least once a week about Barth, exploration, Africa, travel, history, and writing. Expect detours.